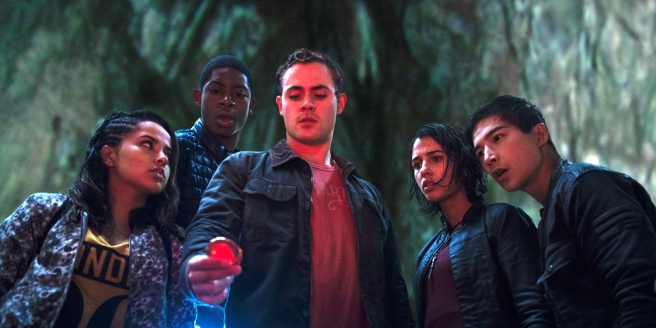 I figured I’d write a fun countdown leading up to my best films. These are films that either underperformed at the box office or panned by critics, but films I still thoroughly enjoyed. Here are my top five watchable flops!

3) Power Rangers – As a 90’s kid, I had some serious excitement for the new take on Power Rangers. I was pleasantly surprised with the movie’s craftsmanship, the ensemble performances, and the film taking on social issues without pulling too hard on my heart strings. Power Rangers is a lighthearted superhero movie that never takes itself too seriously.

1) Logan Lucky – Steven Soderbergh’s directorial return is a blast. Think of Logan Lucky as a satirical version of Ocean’s 11, but in the South. It’s a shame Logan Lucky flopped since it’s one of the funniest heist films and features a great comedic performance from Daniel Craig.

What were your favorite underrated movies of 2017?

The coins empower these kids and lead them to an ancient being named Zordon (Bryan Cranston), who trains them to be the next Power Rangers, protectors of the galaxy. Meanwhile, alien invader Rita Repulsa (Elizabeth Banks) searches for the Zeo Crystal in her plot for world domination.

“Power Rangers” isn’t an original film since it borrows heavily from “Man of Steel” and “Chronicle.” While those films were overly destructive, brooding, and cynical, “Power Rangers” depicts the optimistic side of one discovering powers. Sure, there’s some cheese, but that’s part of the fun.

“The Mighty Morphin Power Rangers” was always a cheesy show with mindless action, but it had heart and great messages about diversity and friendship. “Power Rangers” maintains these messages, even when it occasionally treads on the dark side.

The original series depicted the characters as these perfect, popular kids, but in “Power Rangers,” they’re far from that. Jason is an outcast for letting down Angel Grove’s football team, Kimberly is guilt-ridden over a prank, Zack ditches school to take care of his mom, Billy’s often bullied for his disability, and Trini is afraid of coming out to her parents.

Any writer could have written these sensitive arcs in a juvenile fashion, but writer John Gatins (“Kong: Skull Island”) handles them maturely and realistically. All the rangers feel like kids and not caricatures. The cast does well with their roles, especially RJ Cyler as Billy (I related to him the most).

Elizabeth Banks steals the show as Rita Rapulsa and is clearly having a blast on camera. Whether she steals gold, brag about her plan, or eats a Krispy Kreme doughnut, she rocks.

Speaking of Krispy Kreme, “Power Rangers” over kills Krispy Kreme product placement, but it weirdly suits the plot and tone of the movie. It’s more charming than annoying. I would say the only let down of “Power Rangers” was the action was lackluster (lots of slow-mo, fast-mo fight scenes). But good news is there’s an upcoming sequel, which means room for improvement.