Who can make a movie that has the kinkiest sex scene, the creepiest sex scene, and one darkly funny cat death? I’d say Guillermo Del Toro since The Shape of Water has all of those scenes.

Mute Elisa (Sally Hawkins) works as a janitor at a military facility where an amphibian creature called The Asset (Del Toro veteran Doug Jones) is imprisoned. The lonely Elisa sees something special in The Asset as she shares eggs and music with him. Elisa’s closeted neighbor Giles (Richard Jenkins) and neurotic coworker Zelda (Octavia Spencer) are concerned for her, but agree to help her free The Asset after sadistic government agent Strickland (Michael Shannon) vows to kill it.

The Shape of Water is the closest Del Toro will get to making either a romantic comedy or Beauty and the Beast. This is an R-rated Disney movie; Elisa and The Asset are the Princess and Prince Charming while Zelda and Giles are Elisa’s comic relief sidekicks. In addition to the obvious homages to Disney films and Creature from the Black Lagoon, Del Toro explores ostracism and loneliness.

The film takes place during the Cold War and Civil Rights Movement; Elisa, Zelda, and Giles are all outcasts. Elisa is often taken advantage of for being mute, Zelda’s discriminated against for her race, and Giles often finds harsh rejection instead of love. Hawkins, Spencer, and Jenkins are all wonderful in their performances and portray characters in pain. Hawkins in particular is a strong Best Actress candidate as the expressive Elisa.

As Elisa, Hawkins is committed in portraying a lonely, caring, and devilishly clever hero. We feel bad for Elisa when she makes a tough decision with The Asset, but we also root for her when she taunts Strickland through her sign language.

Shannon owns every scene as Strickland. Del Toro has a knack for writing memorable villains and Strickland is my new favorite of his. Unlike the film’s heroes, Strickland has it all. He’s a respected authority figure, has a beautiful wife, an active sex life, loving kids, a big house, and a teal Cadillac. Yet Strickland’s strive for perfection, acceptance, and decaying hand make him increasingly unhinged.

There’s a great visual motif with Strickland that emphasizes his growing insanity. After The Asset bites off two of his fingers, he gets them reattached, but we see them turn black and more infected as the film progresses. We also see him grow increasingly unattached and uncontrolled as the hand rots. It’s a gross visual motif, but a brilliant one.

I have to praise Del Toro for restraining himself and exploring psychologically complex characters. This is Del Toro’s most character-driven film to date. Yes, the film has some gore and a couple of bizarre sex scenes, but unlike other films, the sex serves a purpose. Elisa and The Asset’s sex scenes are intimate and highlight their love for each other while Strickland’s disturbing sex scene subtly depicts his lust for Elisa.

Though the film is set during the Cold War, I wasn’t too invested in Michael Stuhlbarg’s soviet spy character. Every time he appears on screen, The Shape of Water derives from its dark fairytale roots and turns into a spy movie, losing some focus and tone.

Still, The Shape of Water is a visual treat and delightful to watch. I wouldn’t be surprised if this is a huge competitor for all visual categories in the awards season. 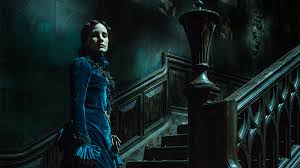 “Crimson Peak” has a line at one point that a character’s novel isn’t a ghost story, but a story with a ghost in it. That sums up the movie well. Mia Wasikowska (“Alice in Wonderland”) plays Edith, a young aspiring writer who marries Thomas (a brilliant Tom Hiddleston), a charismatic engineer. They move Edith into Thomas and his mysterious sister Lucille’s (Jessica Chastain) mansion where Edith discovers her marriage with Thomas isn’t perfect. And why is Lucille insisting Edith drink her tea? Why is Edith constantly woken up in a cliche horror movie fashion by ghosts?

I love Del Toro’s work. I loved both “Hellboy” movies, “Blade II” is my favorite installment in the trilogy, “Pacific Rim” is a criminally underrated monster flick, and “Pan’s Labyrinth” is a damn masterpiece. “Crimson Peak” is still as stunning and bizarre as his previous works, but it doesn’t feel like Del Toro’s heart is in this one.

The basic plot structure of “Crimson Peak” goes something like this – girl has a romantic afternoon with her lover and a standoffish encounter with her sister-in-law. Girl wakes up in the middle of the night and has a disturbing encounter with a ghost who leads her to a secret. This happens at least four times in “Crimson Peak”, and leads to a predictable conclusion.

Wasikowska gives a charming performance as Edith, Hiddleston easily has the best performance and character, giving Thomas a level of complexity, and Charlie Hunnam of “Sons of Anarchy” fame is enjoyable as a hopeless romantic doctor. Jessica Chastain has the weakest role in this movie. She’s wonderfully crazy, but she’s just there for the most part. We don’t get to know what drives her madness.

“Crimson Peak” is worth watching for the visuals and Hiddleston alone, but don’t go in expecting another “Pan’s Labyrinth”.