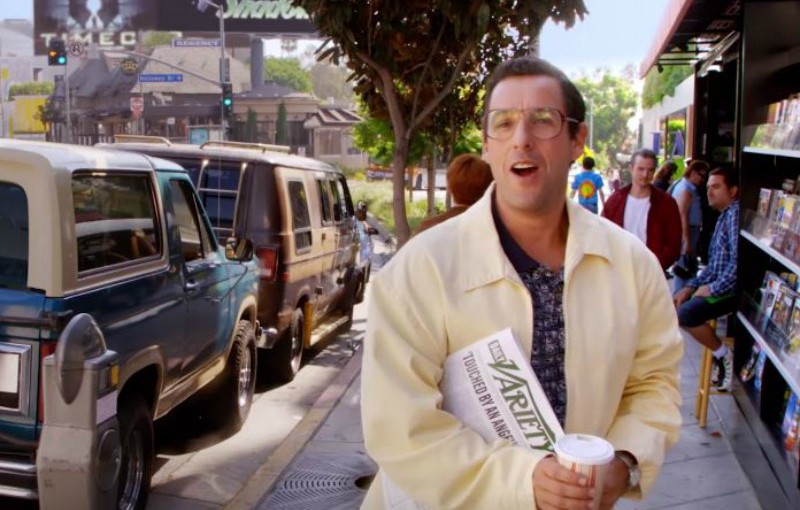 I’m rooting for Adam Sandler. As much as I hate his current movies, I’m rooting for the guy to make another great comedy reminiscent of “Funny People,” “Anger Management,” and “Happy Gilmore.” “Sandy Wexler” is unfortunately not that comeback.

Sandler is the titular character. Wexler is a famous talent manager known for his fierce loyalty and dedication to his clients. Despite his credibility, he lives in the guest house of a mansion, drives a crappy car, and his biggest client is a poor man’s Evil Knievel (Nick Swardson). That’s until he meets a beautiful zoo performer (Jennifer Hudson) and launches her stardom.

Props to Sandler for scrapping his traditional tiresome mean-spirited behavior and attempting to be more sentimental. Unfortunately, “Sandy Wexler” is an uneven and uncomfortable failure. I laughed maybe once, but I can’t even remember the joke.

“Sandy Wexler” is told in a non-linear, mockumentary structure that’s more self-indulgent than clever. It’s just an excuse for Sandler’s friends Jon Lovitz, Kevin Nealon, Dana Carvey, Chris Rock, and David Spade to have cameos. Sandler also attempts to portray Wexler as a lovable ne’er-do-well, but how are we supposed to root for a guy whose biggest flaw is being a compulsive liar?

Jennifer Hudson shows off some great singing chops, but her soulful performance doesn’t mesh with Sandler berating incompetent extras or fleeing angry attack dogs repeatedly. Several jokes in the film are overdone in a 130-minute run time, so the film could have trimmed at least 30 minutes altogether.

I’m not kidding when I say I want Adam Sandler to redeem himself. With “Punch-Drunk Love” (my all-time favorite romantic comedy) under his belt, the man is quite talented. But this 50-year-old actor has to realize that the childish voices and violent temper tantrums aren’t what people want anymore. Fingers crossed he takes the hint before his next movie.