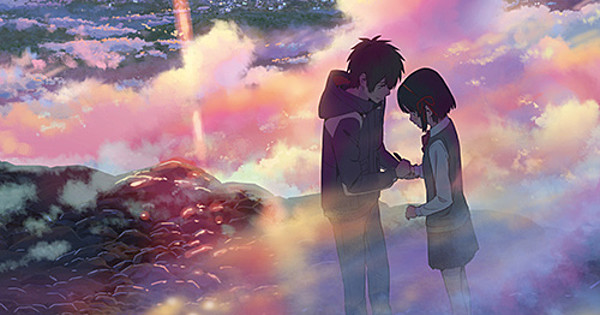 After reading a few reviews, I’m happy I gave a little anime film called “Your Name” a chance. This is a beautiful mind-bender with a rewarding payoff.

Taki and Mitsuha, two Japanese high school students, wake up to find they’ve swapped bodies. They wake up the following day back in their normal bodies, and then again the next day having swapped again. Why? They don’t know and neither to we. This keeps happening as they try to solve this mystery.

“Your Name” is an innovative depiction of time. It utilizes subtlety and editing to keep you guessing what’s going on. Pay close attention to each time a door opens or shuts to catch the body swaps. “Your Name” contains no exposition-fueled monologues, which is a nice change of pace for a sci-fi/fantasy film.

Taki and Mitsuha’s story is more emotional than fantasized. Taki deals with angst and not knowing his place in the world while Mitsuha deals with an estranged father and a difficult political climate. They help each other using text messages and notepad apps in their phones (a clever use of modern technology). They feel like real teenagers and not soap opera characters.

Director Makoto Shinkai (“The Garden of Words”) has made a beautifully drawn film that explores the power of dreams and twilight, as well as the beauty and horror of comets. Each time I felt “Your Name” was slowing down, something new would happen that kept my attention.

“Your Name” is exhausting to watch because we want Taki and Mitsuha to solve their own mystery. Each time they come close, something stops them, whether it’s a person, a dream, or a disaster. It gets mildly redundant, but thankfully the ending is sweet, poetic, and ambiguous enough to keep us wondering what happens afterwards.

Due to its popularity, we can count on a remake of “Your Name,” but it isn’t needed. Especially since the 2006 Keanu Reeves/Sandra Bullock vehicle “The Lake House” is a tamer version. Do yourselves a favor and just see “Your Name.” Especially if you’re an anime fan.