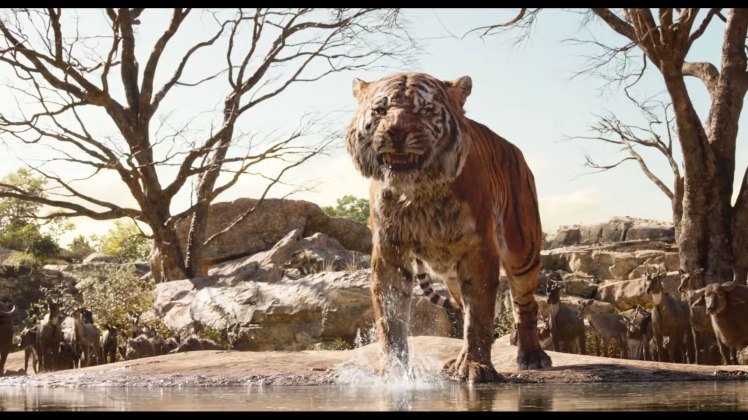 The producers of Jon Favreau’s (“Iron Man” 1 & 2) “Jungle Book” re-imagining should fire their trailer editor because they undersold this movie. I assure you this version isn’t lackluster, my friends!

So, we all know the story of “The Jungle Book”, right? If not, I’ll sum it up. There’s a kid named Mowgli (newcomer Neel Sethi) who’s raised by a panther Bagheera (Ben Kingsley) and a pair of wolves, Raksha and Akeela (Lupita Nyong’o and Giancarlo Esposito). They want him to adapt to the ways of animal culture, but it’s inevitable he won’t because, well, he’s a human!

This is where the vicious tiger Shere Khan (Idris Elba) comes in. He believes Mowgli is a threat and will stop at nothing to kill him, but with the help of his animal family and a bear named Baloo (Bill Murray), Mowgli must face Shere Khan in a fiery climax.

Favreau’s interpretation of “The Jungle Book” is the best live-action version to date. The 1994 live-action version with Jason Scott Lee as a twenty-something Mowgli was fine, but it was missing the magic of the 1967 classic cartoon. Favreau restores the magic that made the original a fun and charming movie, thanks to old-fashioned studio logos, beautiful shots, and an innovative closing credits sequence.

Yes, we get to hear the classic songs like “Bear Necessities” and “I Wan’na Be Like You” (who spells “wanna” like that?”), and they are just as charming as the original. This movie is also visually stunning and thrilling!

The intensity comes mostly from Shere Khan. He is an evil and merciless creature, and Idris Elba provides haunting voice work here. Everyone else delivers exceptional voice performances, but the standout is Bill Murray as Baloo. He’s hilarious, sassy, and classic Bill Murray in the form of a beloved bear.

Christopher Walken also steals a scene as King Louie – a menacing and charismatic orangutan who breaks out in a musical number. Scarlett Johansson is well-cast as Kaa, a lethal snake that’s used as a exposition tool. That’s the problem with both of these scenes – they don’t serve a purpose to the plot.

We’re here for Mowgli’s adventure and self-discovery; not a rushed subplot involving a mobster-like ape or a quick meeting with a seductive snake.

In addition to those two scenes, there’s also a heavily unbalanced tone. Favreau has a hard time deciding if he wants to keep a scene charming like the classic cartoon, or gritty like a DC movie.

Sure, those are a few shortcomings, but the movie is still a fun spectacle! There are talks of Favreau making a sequel and I’m looking forward to seeing these beloved characters return to sing again. Hopefully with a more balanced tone, though.

One thought on ““The Jungle Book””